This villa, a picturesque estate and grounds dating to the 18th Century, is located in the heart of historic Valpolicella, birthplace of the legendary Valpolicella and Amarone wines and just minutes from the city of Verona and Lake Garda. For its cultural and environmental importance the park surrounding the Villa is listed into the “Grandi Giardini Italiani” list of the most relevant historical Italian parks. 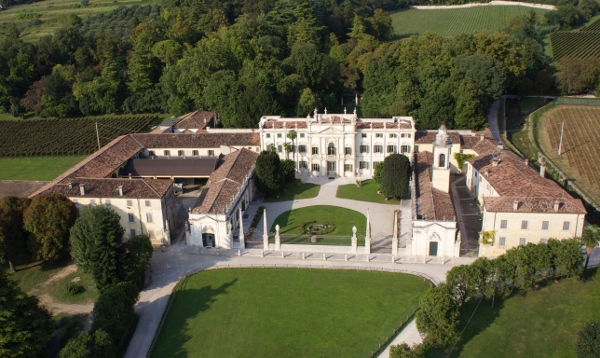 The many different spaces, two full gardens, and eight hectare Romantic-era park nestled in an extensive walled vineyard from the 1500s create the perfect frame for wedding receptions, immersing them in a unique atmosphere both relaxing and refined. The many diverse spaces both internal and external will allow you to organize a staged event without plenty of rooms imagination.

The complex consists of a main building with two lower advancing wings, ending in two symmetrical facades. The bell tower of the chapel — dedicated to St. Gaetano — is built on the east wing. Gates on both wings grant access to the laborors’ housing and the cellars. The main building is three stories consisting of a central pavilion marked by a double row of columns, Tuscan Order on the ground floor and Ionic on the upper level, a pediment containing the coat of arms and topped with five statues of mythical greek gods.

XVIII Century Villa is uniquely well-designed for hosting an event: the many diverse spaces both internal and external offer numerous set-up possibilities, enabling you to organize a staged event with plenty of room for imagination. At the Villa, Religious Weddings (Catholic or Protestant) can be held in his picturesque chapel, meanwhile Symbolic Ceremonies can be performed outside in the romantic park.