A fascinating, ancient and authentic Roman city dating from the 25 BC, Aosta was used as a Roman outpost with the name of Augusta Praetoria and built by Roman legionaries, laid out on a square grid. No wonder that the city is called “the Rome of the Alps”. 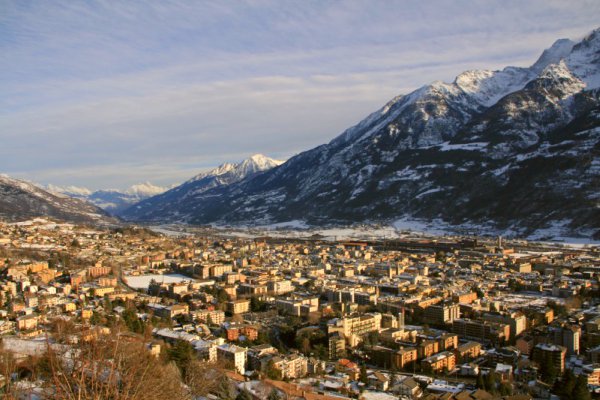 The Romans, equipped for warfare on the mountains, had conquered this location when it was a stronghold of a Celtic tribe, the Salassi. Cesar Augustus needed a fortified city to keep the Barbarian hordes at bay, a stronghold that would not allow them to cross the Alps and then invade the Empire.

Still standing in Aosta are the arch of Augustus, built to commemorate the emperor, the Praetorian gate, the amphitheatre, the city walls with its four towers, the bridge and many other imposing ruins.
Well worth a visit are Aosta’s cathedral and St. Orso church, both dating from the 11th century.

Aosta is set right in the middle of the valley, where the river Dora Baltea and the torrent Buthier join their waters, and the homes of the city climb up to the slopes of the surrounding mountains. From here you can easily reach, in approximately one hour drive, the majestic Mont Blanc, the Alps crowning glory, the Matterhorn, Grand Paradiso and Monte Rosa. In the winter the snow-capped peaks are quite a sight to behold.

Skiing, snowboarding, alpinism, mountain trekking, rafting, nature walks are just a few of the sports and activities that can be enjoyed in this area. Beautiful and serene mountain villages are waiting to be explored, while France and Switzerland are just around the corner. Turin is a short and scenic train ride away.

Italian and French are the official languages spoken in this area.