Todi, a very popular small Umbrian hill-town is situated halfway between Perugia and Terni. It was founded by the Umbrian people on 2700 before Christ. Later on, before the etrurians and after the romans held the power of the town, and building up a number of monuments, most of which can still be admired, like the Nicchioni Romani, on Mercato Vecchio square, which at the beginning were probably part of a basilica. 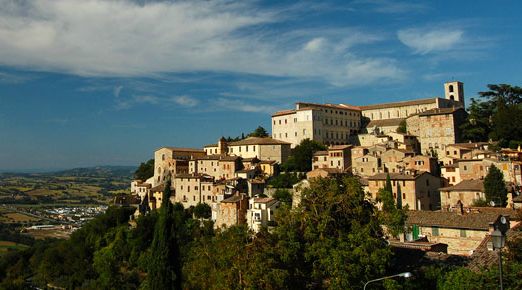 On 88 b.C. Marco Crasso took for himself all the wealth of the town, and during the fall of the roman empire the town was robbed and destroyed. During this time bishop Fortunato bacame the protecting Saint of the town. During the Middle Ages, Todi was always in fight against the close Orvieto.

On the XII century it bacame free commun, being this the onset of a very positve period, and marvelous monuments like Capitain Palace, il Priori Palace, the Dome and the very remarkable St. Fortunato Church were built. On 1236 Jacopone da Todi was born here, one of the firts poets to write in italian dialect and not in latin. On 1500, after a long dark period, the town rised again under the Renaissance influence; dated during this time has to be found the marvelous Consolazione Temple. Many of the public buildings rised during this time are due to the bishop Angelo Cesi.

The town is a network of steep, narrow streets which are typical of the medieval hill towns, the town was divided into three district, Ulpiano, Nuovo and Valle Inferiore. A particularly pleasant experience is to stroll along these narrow streets where one can still see the artisan workshops, numerous little churches and the oratories of ordained clergy and monastic orders. Of the few remaining Castles the most impressive is that of Montenero, perched up on the hill in it’s dominant position overlooking the southern territorial boundaries and surrounded by a thick forest of pine trees. Of particular interest is the ancient Campidoglio, 411 meters above sea level along the retaining walls of the Rocca Park.

Todi being a hill town is surrounded in every direction by breathtaking views of the splendid green Umbrian hills covered with vines, olive groves and sunflower field, which will leave you spellbound. During the summer there are the open air Sagras (culinary events) with local specialties and entertainment The Umbrian gastronomy is essentially simple and it is characterized by the genuine products.