In Vinci, everything is about Leonardo: the native house, the church where he was baptized, the museum and the library dedicated to him, even the landscape, still intact, which Leonardo himself had contemplated daily. 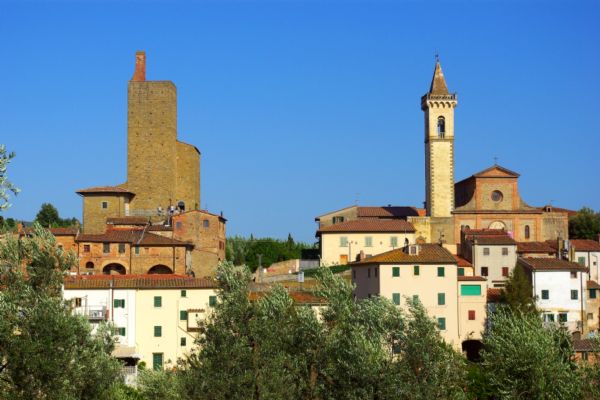 Vinci rises along the south-western side of the Albano mount, in the low Valdarno area. The place name probably comes from the Latin “vincus”, with the meaning of “wicker”, and later this latter got its actual form according to the Latin word “vincis”. The village dates back to the early Middle Ages, and has its center in the castle, which belonged to the Guidi Counts until 1254, the year in which it was subdued by Florence and transformed into a municipality. Called the “castle of the ship” for the extended form of the small town, which recalls the shape of a boat, today, the castle of the Guidi Counts houses the Leonardo da Vinci Museum. It is one the larger and more ingenious collections of machines and models created by Leonardo as technologist and engineer.

As you arrive here, you can feel in the air the deep connection that exists between Leonardo and those landscapes and the impossibility of separating them. The gentle hills, the wide fields of vineyards and olive trees and the sun itself are integral parts of the museum and of its history: this beauty has doubtless contributed to envelope and influence the fantasy, wits, creativity and genius of one of the greatest men in the world.