In existence since 1237, Mercatale di Val di Pesa is a town that lies within the Chianti Classico wine zone at the top of the hills that separate the Greve Valley from the Pesa Valley. This historic town makes a wonderful backdrop for an authentic Italian marriage ceremony. Archaelogy buffs and those who relish the flavor of olden days will enjoy this area and its fascinating stories. The weather is mild in Mercatale di Val di Pesa, and the people are friendly. 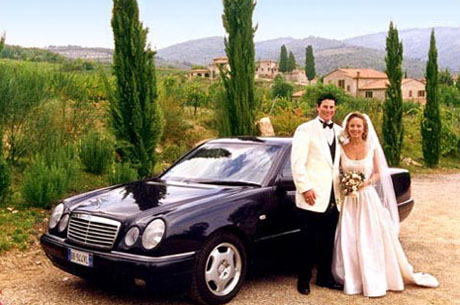 During the 1200s, it is believed that Messer Marzoppo della Tosa, the Podestà of Montecampolese, dictated that a public square be built, and it quickly became the location of the local community market. Religious holidays, fairs, celebrations and special events were held there and the place became known as a center of commerce where food was sold, goods were bargained for, and all manner of merchandise changed hands. The area became well known for business dealings, and a number of similar opportunities began to form. These famed markets were held outside the walls of the ancient castles and were named “Mercatali”, a word that still identifies a number of towns throughout the region of Tuscany.

The area is filled with distinctive architecture that reflects the early period of the town’s history. The distinguished Strozzi family built their palace in this square, and today it is known as Villa Nunzi. Located in the area of Chianti, which is a borough of San Casciano in Val di Pesa, it is considered one of the oldest and most beautiful buildings in the area flanking a variety of other prominent buildings. The Church of St. Mary at Mercatale is located near the villa and houses a collection of celebrated artistic works. Filled with the magic of yesteryear, Mercatale di Val di Pesa is a great choice for a destination wedding!