One of the best preserved medieval towns of Tuscany, Siena is laid out on three hills and surrounded by ancient walls offering first time visitors a stricking view as they approach its outskirts. Siena fulfills every expectation you might have of an authentic and exceptionally well-preserved medieval city. It is an exciting destination for a wedding in Tuscany not only for its beauty but for its varied selection of ceremony and reception options. 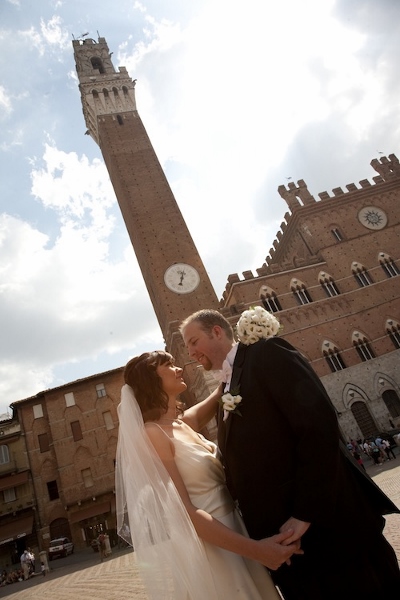 The city was founded by Etruscans and grew into a military stronghold under the Romans thanks to its position. It was not until the late Middle Ages however that Siena flourished and became an important center of art, finance and trade causing other cities such as Florence considerable jealousy and hence repeated warfare. Winning a complete victory in 1260’s against Florence allowed Siena to enjoy a rich and prosperous period during which some of the most noteworthy buildings were erected such as the present wedding hall (Palazzo Comunale), Palazzo Sansedoni and the truly extraordinary cathedral.

Imagine being able to celebrate your civil marriage in Siena’s most magnificent square and Palazzo. The interiors are among the finest in Italy with amazing ceilings, wall to wall frescoes and wood interiors. As you exit the Palazzo you are facing one of the most perfect squares in the country, a sprawling piazza perfect for spectacular wedding photos.

Siena remains faithful to its traditions by celebrating annual festivities such as the Palio race, the trecherous bareback horserace around the Piazza del Campo held in July and August. The city is divided into districs called “contrade” of which there are 17, each with allegorical names such as unicorn (Leocorno) or dragon and claims a patron saint and church. The Contrade’s are represented with flags and special heraldry making the Palio a most colourful and exciting pageant that has remained unchanged for centuries. Victory night is celebrated by all Sienese with an outdoor dinner on the narrow medieval cobbled streets; a seemingly endless long table lit by candles where locals and a few lucky guests enjoy the traditional Tuscan fare and local Chianti wines.

The city of Siena is in the heart of the wine country and Chianti Classico’s zone and a culinary highlight as you explore this region so rich in the best Italy can offer from olives producing deep green olive oil to Pecorino cheeses to the best steaks in the country. A wedding reception in Siena is sure to be remembered by all your guests for years to come.

Celebrate your marriage in Siena; you will not be disappointed!