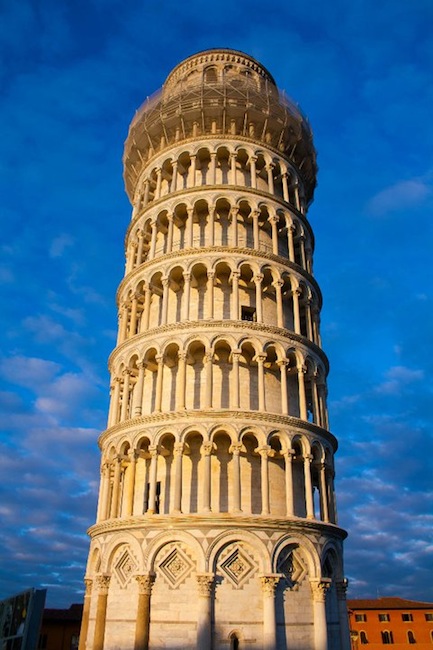 Located west of Florence in the Italian Region of Tuscany, Pisa is home to some world-famous landmarks and interesting attractions, like the Leaning Tower.

This ecclesiastical city began its life as a seaside settlement around 3,000 years ago and was first laid out in the mid-eleventh century.

Today, Pisa is crammed full of wonderful, historical monuments and buildings dating back many hundreds of years, and much of the city has managed to retain its medieval appearance. Pisa is also known for its excellent university, which was established in 1343 and has become one of Italy’s top schools.

In the north-west of Pisa there is an immense green lawn on which four impressive buildings stand, in gleaming white marble. These imposing structures are the enormous, breathtaking Duomo (cathedral) – built almost 1,000 years ago, the cathedral’s bell tower – better known as the Leaning Tower of Pisa, the circular Battistero (Baptistery) – the largest of its kind in the whole of Italy, and the Camposanto – also known as the Holy Field, without doubt one of the most beautiful cemeteries in the world. This area is referred to as the Campo dei Miracoli or the Piazza dei Miracoli (Field of Miracles) and these remarkable Tuscan buildings combine Moorish, Gothic and Romanesque architectural features.

Many visitors arrive in Pisa via the Pisa International Airport.  Passenger rail service is available to Pisa’s Central Train Station from Florence, Livorno and many cities in Italy.

Due to its location near the Italian Riviera, Pisa enjoy a pleasant climate for most of the year.

Pisa town hall offers some of its prestigious location to let you celebrate your civil wedding.

Enchanting and striking places that will make your day full of magic: S. Zeno Abbey, San Gallo Fortress and its garden and the wonderful frescoed town halls like Degli Stemmi Hall or Baleari Hall.