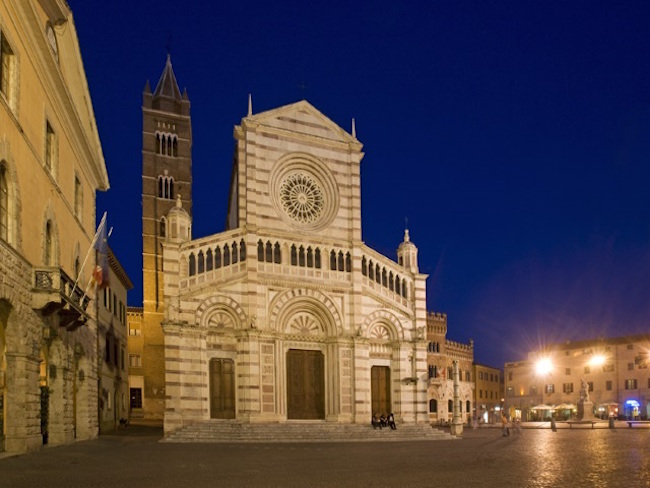 Getting married in Grosseto means saying “I do” in the capital of a still unexplored area of Tuscany called “Maremma”.

This wonderful place is far from Florence or Siena bright lights, so, Grosseto remains true to its past and usages.

This noble city is the vital centre of the Maremma and lies in a green plain traced by Ombre river, the second most important one in Tuscany, after the more famous Arno.

Its origins go back to the powerful Etruscan and Roman city of Roselle (which you can find ruins, roads and mosaics around the town) and walking among the military, civil and religious monuments, you are able to cover twelve centuries of history.

The most important monument of the city is the Romanesque Cathedral; its construction began in the 13th century and with its latin cross layout took over 200 years to be completed. Just next to it, Aldobrandeschi Palace will welcome you with its neo-ghotic facade featuring mullioned windows and gorgeous merlons on the upper walls.

Not only history, but also nature and green: not far from this tuscan jewel, you’ll be able to reach Maremma Regional Park, one of the first protect areas of Italy, while the close Arcipelago Toscano National Park is particularly interesting for those who loves swimming in clean water, maybe diving from a rock of Isles of Giglio and Giannutri, two real jewels of Tyrrhenian Sea.

This is the perfect Destination Wedding for nature and sea lovers and for those who wish to explore an uncontaminated land by the tourism explosion!