The existence of this villa has been documented since the XVIII century, but the current layout is the result of a transformation process that took place between 1870 and 1885, when the property belonged to a senese aristocrat living in Florence. In accordance with the spirit of renewal in taste and style that reigned in Florence at that time, he built a completely innovative villa and garden complex, creating a romantic park similar to those being built in Florence under the guidance of the architect Poggi and the family of Pucci gardeners. 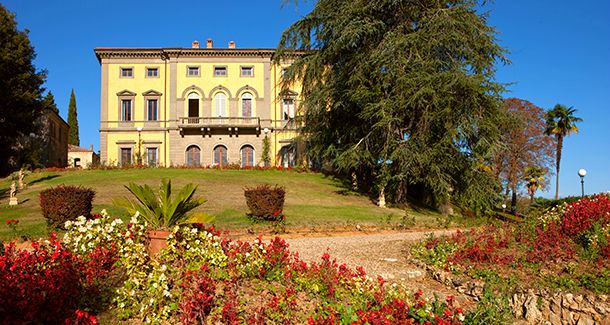 Villa Gerbera has three floors and the façade is divided into three parts; the central part has three entrance portals. The property has recently been renovated and provided with air conditioning and Wi-Fi internet connection. The furnishings consist of antiques of different styles and from different periods, precious wall hangings and ornaments of great artistic value. Whilst preserving its beautiful period features, the old kitchen is very professional and has all the latest modern accessories.

The park covers an area of around three hectares and occupies a portion of sloping land in front of the villa that stretches to the south and to the west and is enclosed by a wall. It is divided into two parts: the first part consists of a flower garden situated on the higher ground, whereas the lower part, which includes a swimming pool for guests to use, with bathrooms and changing rooms, is a true romantic park with large wooded areas crossed by paths that suddenly open up to reveal stunning views of the Tuscan hills.

The water features are one of the particularly distinctive elements of the garden, consisting of several fountains, structures characterized by water play and, above all, the Nymphaeum, also known as “Venus’ pool”. The park also has a large brick and cast iron aviary, a lemon orchard and a rich collection of large citrus trees. The villa’s location in the Chianti countryside, just 9 Km from Siena, makes it a privileged and exclusive place. The villa is situated inside a large farm that produces excellent quality extra virgin olive oil and Chianti wine.