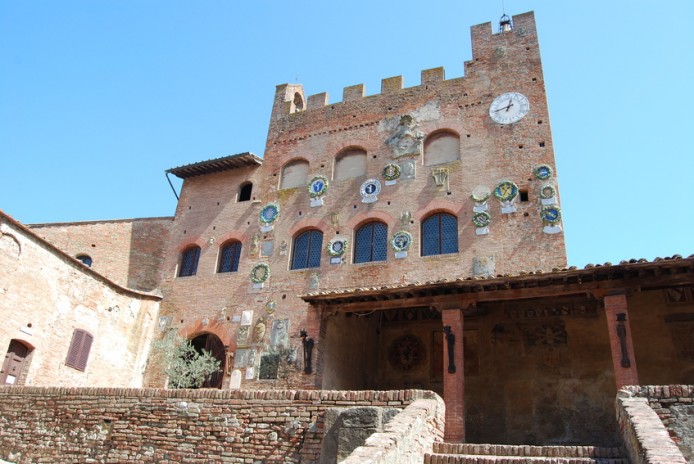 One of the main attractions of Certaldo is the lovely Palazzo Pretorio. Built in the 12th century and reconstructed in the 15th, it also features 14th century battlements, from which you can admire a panoramic view of the surrounding countryside.

The palace was formerly the residence of the governing magistrates of the area, and contains many artistic treasures. These include beautiful frescoes, paintings, and artifacts from the Etruscan, Roman and Medieval periods.

Certaldo’s most famous inhabitant was the renowned 14th century novelist, Giovanni Boccaccio, author of Il Decamerone. His former home, the Casa del Boccaccio, now houses the National Center of Studies on his works, and includes a specialized library. Boccaccio’s influence is still strongly felt in Certaldo – even the main street through the town is named after him.

Another must-see is the elegantly simple Romanesque church of Santi Jacopo e Filippo, built in the 1200’s. Boccaccio’s tombstone is set in the floor of the church, and its cloister holds Certaldo’s museum of sacred art.

Certaldo’s historic buildings have been carefully conserved, and the town has a timeless appeal. It is a highly picturesque and romantic place to celebrate your wedding in Italy, strongly recommended.