Moorish Villa was and is a dream come true, lying on the shores of romantic Lake Orta. Cristoforo Benigno Crespi, a pioneer of the Italian cotton industry, while travelling on business in the Middle East was bewitched by Baghdad and its charms and in 1879 finished his own magnificent Moorish villa surrounded by a park that sloped down to the lake. It had taken him 30 years to complete. Over the course of time, a series of owners have held the Villa, and in the 1930’s, it became an exclusive place for visits by poets, nobles and kings, well-known all over Northern Europe. 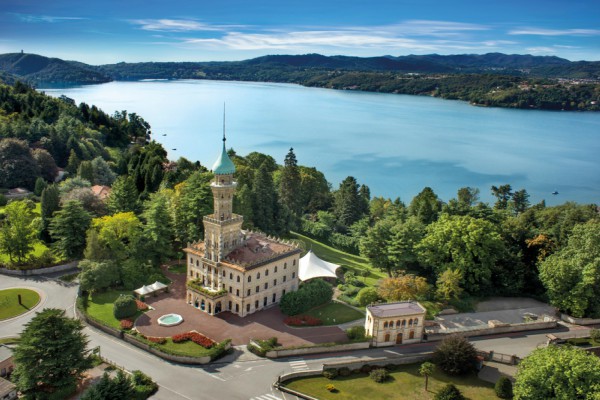 The Villa has 14 rooms and suites on three floors. Inside the architecture and Moorish style reflect the middle eastern theme which is also a characteristic of the exterior of the residence. This style includes stuccoes and inlays that remind us of those far-off places which as a cotton merchant he regularly visited during business trips to Baghdad and Asia. These rooms, which are furnished in the elegant style of the19th century with Arabesque features in the doors and windows, are decorated with gorgeous parquet flooring and period furniture, the bathrooms being in marble.

Moorish Villa’s restaurant dining rooms are the perfect dimension to show off the magic of Master Chef’s dishes. Elegant furnishings and place settings with the utmost care for detail, drapes, paintings and fine tableware are the perfect match for the Villa’s  Moorish atmosphere and baroque finish. The veranda and the 3 ground floor rooms that make up the restaurant take you on a journey around the square area of the Villa where there are about 20 tables in all.

Wedding will be unforgettable at Moorish Villa! A first glance at Villa will be enough to be entirely charmed by the Moorish architecture, the sumptuous, elegantly furnished rooms and  the romantic age-old park. Every single moment is looked after in the minutest of details and personalized according to taste for a truly special, unforgettable event.