Small but perfectly formed, Lago d’Orta is one of the prettiest sub-alpine lakes in northern Italy and a lovely place to celebrate a wedding in Italy. 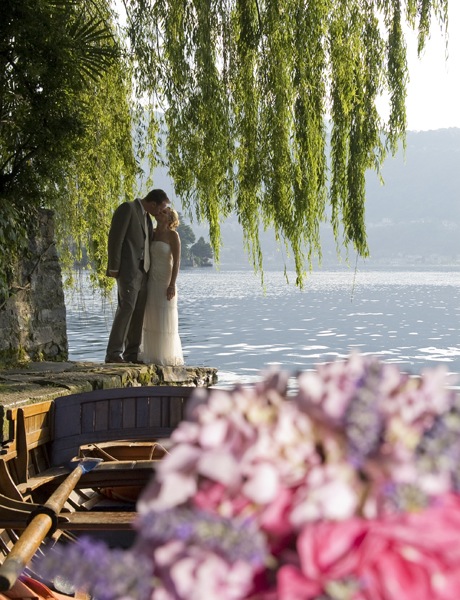 Its mystical island, Isola San Giulio, and the small town on its eastern shore, Orta San Giulio, are both named after the priest San Giulio. He arrived in 390 AD and is said to have scared away a huge serpent which ruled the aforementioned island. After this, he constructed a church there. Following great damage in the 10th century, the basilica was rebuilt and now also features an imposing 12th century tower. Inside you will find centuries-old frescoes and a dramatic black marble pulpit carved with intriguing sculptures.

The legends connected to the priest and the serpent are still strongly felt here. Also on this tiny island-village are several elegant villas and an imposing white seminary, built in the 19th century on the site of an ancient castle. Regular boats will take you over to Isola San Giulio from the lake’s shore, and it is a charming place to visit.

The picturesque town of Orta San Giulio is a maze of narrow cobbled streets, lined with pastel colored houses and opulent palaces. Two piazzas open onto the lake and offer a superb view of the island. You can spend as long as you like relaxing in one of the many pavement cafés here and soaking up the atmosphere. The diminutive town hall, decorated with frescoes, also faces onto the two squares.

After finishing your coffee, you may like to take a stroll along the romantic lakeside promenade Via Giovanetti, followed by a delicious meal in one of Orta’s many excellent restaurants.

Get married in Orta and you will have verdant pine forests and the deep blue waters of the lake as your backdrop. Orta, its island and its quiet lakeside town have been seducing visitors for centuries, and for good reason – your wedding in Orta will be an unforgettable experience.