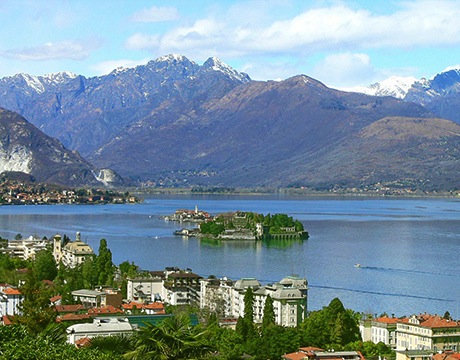 Surrounded by soaring mountains, lush forests and ancient palaces, Lake Maggiore is the most famous and dramatic of all the Italian Lakes. The climate is mild every season, and is conducive to the flourishing of Mediterranean and exotic plants. Lake Maggiore is based in a tropical setting, with an Alpine, mountainous backdrop. The Lake is 30 miles long and 3 miles wide. The western shore is where most of the prominent resorts are located, particularly Stresa, a tourist town that was one of the sites for Hemingway’s A Farewell to Arms. The western shore is bustling with activity and offers more options for leisure and recreational activities.

The eastern shore is clearly more subdued, but just as unique and enjoyable. Boats to the Isole Borromee depart every 15-30 minutes from the dock at Stresa’s Piazza Marconi.

Lake Maggiores Borromean islands are named after the Borromeos, a family of wealth and nobility who over many years developed the islands as a special resort. The islands are filled with lemon groves, palm trees and other subtropical plants that climb around the collection of luxurious villas. The area has grottos, Baroque palaces, and spectacular gardens.

Isola Bella, which was once nothing more than a rocky island in Lake Maggiore, is now entirely occupied by a lavish 16-century Borromeo villa, which contains some of the most beautiful gardens in the world.

Because of its resort surroundings and its stately landscape, Lake Maggiore is a grand choice for a destination wedding. Offering a perfect example of traditional beauty, the area provides utmost conditions for a dazzling marriage ceremony.