Celebrate a sophisticated Italian wedding in Milan, the fashion capital of the country, which is also known for its economic power and historic significance. Milan is believed to have been founded by Celtic tribes in the 7th century BC, and it has since grown into one of Italy’s biggest and most popular cities.

All over the city, you will find cafés and restaurants, theaters and cinemas, museums and art galleries. There is a huge amount to see and do in Milan. The quintessential Milanese experience is a visit to the exclusive shopping districts, which rival Paris in their prestige. The city is also home to several historic sites, plus a great number of beautiful churches and palaces. 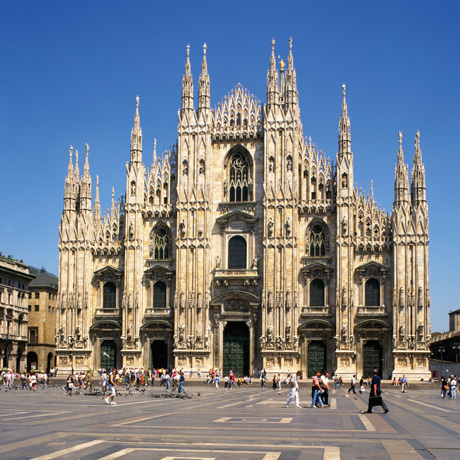 The stunning 14th century duomo in the city center, Milan’s showpiece cathedral, is the fourth largest church in the world. It is late Gothic in style, and the neighboring museum will reveal more to you about its history and significance.

The renowned Teatro alla Scala is also accompanied by a museum. This world-famous opera theater was built in the 18th century and is a high point of a visit to Milan.

The Cenacola Vinciano is the place to see Leonardo da Vinci’s masterpiece The Last Supper. You can also appreciate da Vinci’s work elsewhere in the city – it was he who designed the defenses of the Castello Sforzesco. The castle now encompasses several museums which feature paintings, sculptures, and, more unusually, Egyptian artifacts. A 116 acre park lies directly behind the Castello – the Parco Sempione. A quiet stroll along its paths will take you a world away from the pace of city life.

Milan is both lively and stylish, providing an effortlessly chic backdrop to your wedding day celebrations. The city is an excellent choice for your wedding in Italy.