Monterotondo means “round hill” in Italian. The town of Monterotondo is in fact built high on three hills, enjoying magnificent views of the surrounding Lazio countryside. The Wedding Hall is truly remarkable with its lovely frescoes and original antiques. The atmosphere is intimate and private, away from tourists and crowds yet only 20 minutes from the heart of Rome. 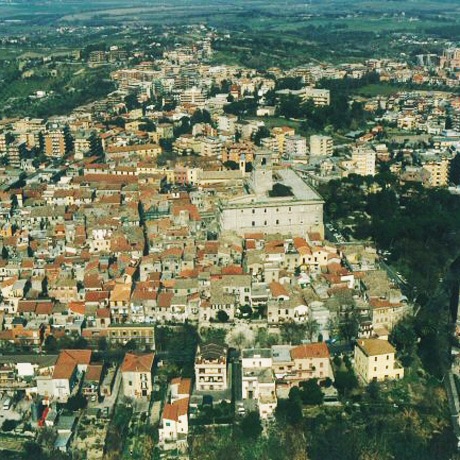 Marry in Monterotondo, a charming town of under 35,000 inhabitants just outside Rome and gracefully perched on top of three hills that dominate the Tiber valley. It is approximately 20 kilometers from Rome. The mild climate favors the surrounding vineyards which produce excellent wines.

Monterotondo dates back to pre-Roman times and was even mentioned by the ancient poet Virgil. From the XIII century the city’s history begins to identify with the noble Roman families such as Orsini and Barberini. During the 1500’s and under the protection of the Barberini family the present urban design was completed and the town declared a Duchy. The S. Maria Maddalena Duomo was built during this period as well as the main piazza; Piazza del Popolo.

The historic heart is mainly medieval and renaissance and the town is built over the Mount Ginestra. The Rock (Rocca) which is today the Wedding Hall was re-done in renaissance style by the Orsini family in the 1500’s and has a very impressive entrance leading into the castle. The interior offers a charming small courtyard with the Medici and papal coat of arms. From here a formal staircase known as the Royal Staircase you reach the main floor which is decorated in renaissance style with octagonal columns. Four of the main halls have formal frescoes by Sermoneta with mythical figures, while other halls have been decorated with elaborate gilding and woodwork. Overall, it is a most impressive palace for your wedding ceremony in Monterotondo.

Also in the heart of town are the various churches of S. Maria Maddalena and S. Maria delle Grazie considered to be some of the finest early renaissance monuments in Lazio and built in honor of the Orsini family.

If you happen to visit Monterotondo during the last week of May you can celebrate the festival of the local pecorino cheese and local fava bean (Sagra della Fava e Pecorino) which can be tasted in various local dishes accompanied by music, dancing and other culinary delights! Further festivals take place in the middle of July in the Sagra della Panzanella. Many of these celebrations go back hundreds of years and are a pleasant way to experience local life and traditions.

We believe that Monterotondo is an idyllic setting for your wedding ceremony and offers all the advantages of being close to Rome but just out enough so that you can escape the crowds and have an intimate and romantic event.