Trani is ready to host your special wedding ceremony in Apulia within its marvelous historical-artistic frame. Trani has been the coast landmark for the sea trade between East and West; it is the city which has made the romanico pugliese an eternal architectural style by preserving its memory inside the superb Cathedral. Trani is the city of the white stone, sculpted and magnified by the sun rays touching the baroque churches and the nineteenth-century palaces. 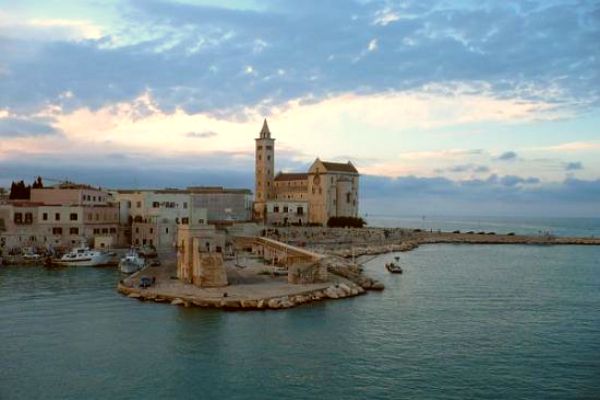 Trani lies in the province of Bari and overlooks the Adriatic Sea just next to a small bay where a well-sheltered sea port has been built. It is one of the most well-equipped yachting ports on the southern Adriatic coast, and for a long time it has been an important landmark for the national and international sport sailing.

The original core of Trani presents a fishbone urban structure, a typical Norman one, which develops itself by following the port inlet. Houses and wonderful monuments date back to the Swabian period. They witness a noble past.

Celebrate your Catholic wedding in Trani if your wish is for a special religious ceremony. Trani offers a wide range of historical and particular churches, but the ancient Cathedral might be your ideal setting. It is one of the best Romanesque style buildings of Apulia, the result of a superimposing of three buildings which were built on the same spot. A double flight of stairs precedes the Cathedral, flanked by a thirteenth-century church tower. The façade is decorated by white-rose stones and by a beautiful rose window. A notable bronze portal gives access to the church. The interior is simple but full of charm.

If you wish to set your wedding photography service in a special place, choose the villa comunale of Trani. It is certainly the right setting: One of the most fascinating European gardens on the sea. In this enchanting garden you will take the best pictures for your wedding album while enjoying the surrounding panorama.

The Swabian Castle is another attractive building of Trani, which has been built in 1230 by Federico II. It is situated right on the sea and in front of the majestic Cathedral, with its four quadrangular towers: It still shows itself in all its grand splendor.

For your wedding reception in Trani, Apulia we advise you to try local delicious fish dishes and the Moscato di Trani, the most ancient and noble Apulian wine.