Italy has plenty of terrific spots, that’s for sure. It is even really hard sometimes to express feelings and emotions that they could inspire. Capri is definitely one of them.
Luckily, we have found a gorgeous description of this little Mediterranean isle given by Smithsonian.com (just few quotes) that gets the idea across perfectly! 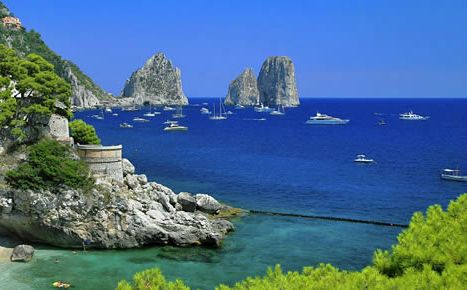 “For over 2,000 years, this speck in the Gulf of Naples, only four miles long and two miles wide, has been known for its dazzling beauty and extreme tolerance. Writers, artists and musicians have long been drawn to its shores. “Capri has always existed as un mondo a parte, a world apart,” said Ausilia Veneruso, the organizer of the Matermània Grotto event and, with her husband, Riccardo Esposito, owner of three bookshops and a publishing house that specializes in writings about Capri. “It is the hermaphrodite island, a collision of mountains and sea, where opposites thrive and every political ideology and sexual preference finds a place,” she told me. “By the 19th century, our little island was for artists like the center of the world: Europe had two arts capitals, Paris and Capri.”

Capri’s cosmopolitan past remains part of its allure. “For centuries, Capri was shaped by foreign travelers,” said Sara Oliviera, vice president of the Friends of the Certosa (monastery) of Capri. “The island was a crossroads of international culture. Now we want to revive those connections.”…

…Today the island is more popular than ever, as shown by its two million visitors annually. Residents are worried. “Once, visitors would rent a villa and stay for a month,” says bookshop owner Ausilia Veneruso. “Now they come for only two or three days, or even worse, come as i giornalieri, day-trippers. And Capri is a very delicate place.” The influx has led to overfishing and overdevelopment. “The sea is lost,” Raffaele La Capria writes in Capri and No Longer Capri, “more lost than Pompeii and Herculaneum,” while the island itself suffers “a kind of process of dry putrefaction.”

Still, peace and solitude can be found, even in summer. Most tourists cluster around the marinas and piazzas, leaving the miles of hiking trails along the island’s rugged west coast virtually empty, including a three-hour Route of the Forts, which links several medieval fortresses. And after the day-trippers leave in early evening, even Capri town appears much the same as it did when Gable watched Loren sing “You Wanna Be Americano” in a nightclub…”

Capri can’t be summed up in this little description, of course! If this article raises your curiosity about this tiny Mediterranean isle, don’t hesitate to contact us for further information.
We can assure that Capri could be the perfect choice for your wedding day!