The beautiful capital of the Emilia region, Bologna, is a popular choice for Italian weddings. A wedding Bologna will give you a cultural experience all of its own. This wealthy Italian city has retained a great sense of history and countless hours can be spent in its exploration. Its churches, palaces, squares and monuments are numerous and there is always something new to discover. 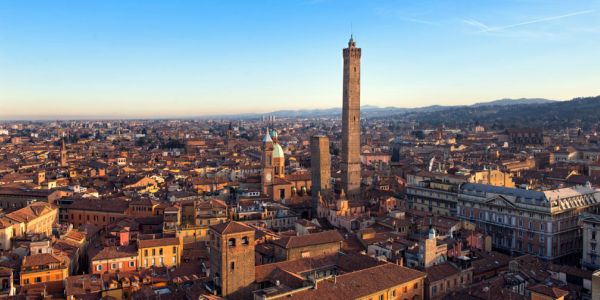 The Piazza Maggiore and Piazza del Nettuno stand side by side at the center of the city, and are at the heart of its social life. Their cafés are busy from morning until night – this is the ideal place to sit back with an espresso and really savor the sights and sounds of Bologna.

The extravagant Neptune Fountain is situated at the center of Piazza del Nettuno, and both squares are surrounded by lovely churches, palaces and museums. The most impressive church here is widely agreed to be the enormous Gothic Church of San Petronio, which dates back to the 14th century.

Other highlights among Bologna’s many religious structures are the Basilica of San Francesco, the ancient city cathedral, the Metropolitana di San Pietro, and the 13th century Church of San Domenico.

The university quarter is a very picturesque part of the city, which features much 17th and 18th century architecture. Many churches from different periods in the history of Bologna are found here, including the city’s oldest, the 5th century Santi Vitale e Agricola.

The best known landmarks of the area are the Due Torre – the only two Medieval towers that remain in Bologna, from the hundreds that once stood throughout the city.

Bologna is also known for its theater, its music, its art galleries and its summer festival which is extremely popular. History and modern culture blend seamlessly together. A wedding in Bologna is the most romantic way to discover this lovely Italian city – don’t be surprised if you want to return again and again after you get married in Italy!